‘Hard to see the path out’: Cuomo besieged as crises grow 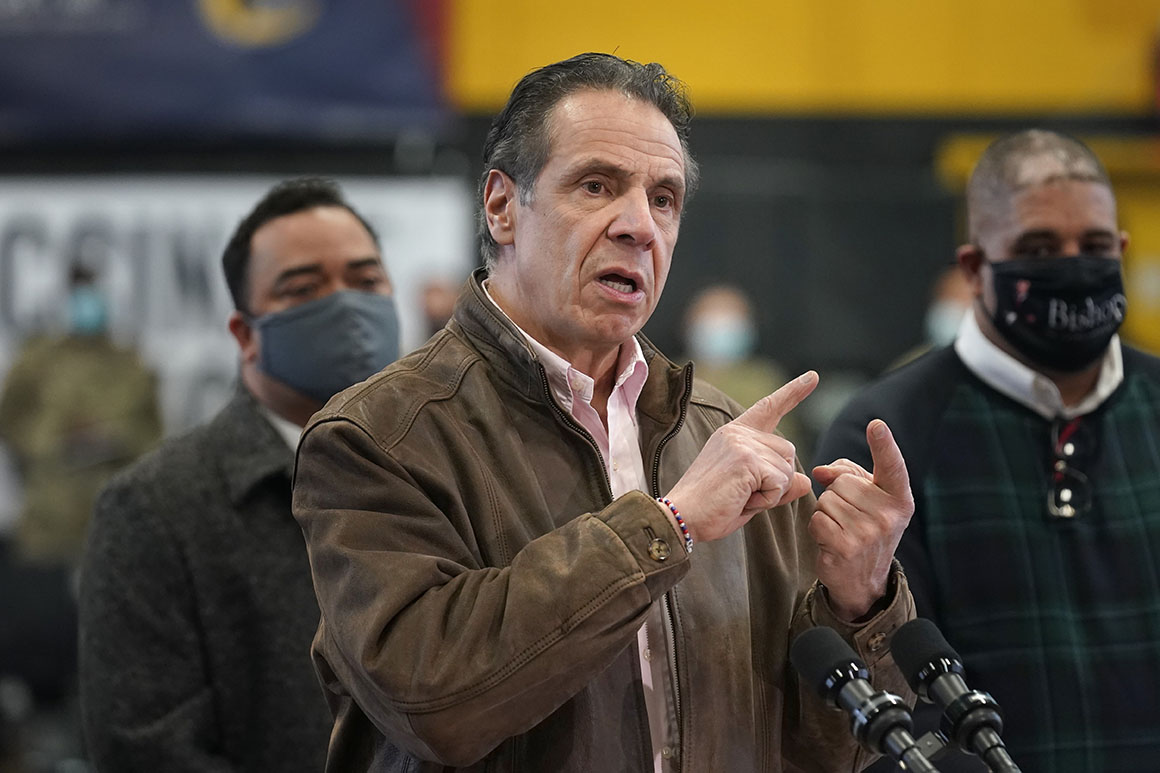 ALBANY, N.Y. — New York Gov. Andrew Cuomo started the year as one of the nation’s most powerful governors, a household name who was racing toward a potential fourth term in office.

Now, two months later, he’s embroiled in two major scandals and facing a daily onslaught of questions about deaths in nursing homes, accusations of sexual impropriety and growing speculation that his political career may be in jeopardy.

"It appears he's earned himself a primary," said New York City Public Advocate Jumaane Williams, a frequent critic of the governor and one of the names tossed around as a possible 2022 challenger.

New allegations from a former aide, Lindsey Boylan, who says Cuomo kissed her without her consent, suggested a game of strip poker while on a business trip and made other inappropriate comments.

As the governor scrambled to deal with the fallout from that scandal, one of his top cabinet members was in a standoff Thursday with state lawmakers over the other: The revelation that his administration for months failed to report the deaths of thousands of nursing home patients who had been hospitalized with Covid-19.

That controversy mushroomed last week when Assemblymember Ron Kim (D-Queens) said Cuomo called him and threatened to destroy his career over his nursing home criticism, drawing attention to Cuomo’s some describe as bullying and abusive.

Cuomo’s growing body of detractors now encompasses Republicans, progressives, good government types and women’s rights advocates, among others. To his critics, the two controversies are not unrelated.

“Sexual harassment is a form of power abuse, and when you piece it it altogether— the hidden but now public harassment and what we’ve already seen in broad daylight by Cuomo— you can put together a profile of the kind of power abuser he really is,” said Erica Vladimer, a former legislative staffer who and to address a culture of such behavior in Albany.

Unlike questions over his policy decisions, friends and foes alike have called the new attacks on Cuomo’s character self-inflicted. His decision to call and berate Kim — and Kim’s decision to air it publicly — opened a floodgate for others with similar experiences, said New York’s GOP chair Nick Langworthy, during a Thursday discussion the party hosted virtually with his counterpart in California.

“Cuomo made a very big mistake in doing this because Assemblyman Kim took the age old advice on how to handle a bully, which was that he fought back, punched back, and in doing so, inspired many others to recount their own stories of inappropriate and abusive behavior by this governor,” Langworthy said.

The allegations were enough to drive Cuomo’s Emmy-winning briefings off the air, at least for a day: The governor scrapped a virtual press conference that had been planned for Wednesday as an embattled administration and weary staff pivoted to a new sort of crisis almost exactly a year after the first Covid-19 case was found in the state.

For a governor who has been so much in the public eye over the last year, his silence in recent days has been conspicuous.

“The moment requires something other than hiding back, but he’s not there yet,” said an administration official.

Cuomo is a self-proclaimed gearhead and fix-it guy, but a sexual misconduct allegation isn’t something that can easily be shut down with a political machination or a pivot. “‘The car broke down and I’m going to get it going?’ Well, that’s not the right metaphor [for now],” the official said.

Mayor Bill de Blasio, another frequent foe, on Thursday joined calls from both Republicans and fellow Democrats for an independent probe into the sexual harassment allegations.

Cuomo’s poll numbers have already suffered from the nursing home scandal. His job approval rating was down to 48 percent in a Marist poll released this week. Only 36 percent of registered voters said Cuomo deserves to be re-elected to a fourth term, while 58 percent said it’s “time to elect someone else.” That survey came out before Boylan published her harassment account.

“He’s not dead yet, but he’s taken a sizable hit. I think New Yorkers are paying attention in a way they haven’t before,” said Republican consultant Jessica Proud.

“It’s hard to see the path out of this for him. He’s someone that will certainly dig his claws in, and I don’t think he will resign of his own volition,” she said. “He will essentially be a non-functioning governor.”

Any effort to take down Cuomo, however, will face its own obstacles. Despite mounting calls for an investigation into the harassment allegations, there is . Albany’s main investigatory body, the .

Some have called for an investigation by state Attorney General Tish James or special prosecutor she could appoint. She, too, has been a Cuomo ally, but has recently asserted her independence: It was her investigation that first revealed the state undercounted nursing home deaths by about 50 percent. The state’s top into the harassment claims.

It’s unclear what James might do, should she decide to engage. The office of New York’s attorney general has wide jurisdiction to weigh in on state ethics matters, but those have historically been assumed on a situational basis. A spokesperson for James’ office said they are reviewing the letter from GOP lawmakers, but did not comment further.

Advocates for anti-harassment reforms are calling for a standing referral — either from the Legislature or the executive — giving the attorney general the power to investigate, issue reports and, where necessary, prosecute cases of sexual misconduct.

That would give more clarity for who should tackle this and any other civil or criminal investigations that might arise in the future, said Zephyr Teachout, a Fordham law professor and Cuomo critic who has run for both governor and attorney general on Democratic lines.

“In Albany, sexual misconduct, silencing and retaliation has gone hand in hand with corruption,” she said. “People who are harassed in Albany repeatedly feel trapped because the places they might turn to complain are all deeply intertwined with power structures.”

“Obviously I’ve been criticizing Andrew Cuomo for a long time,” Teachout added. “But this moment is different because of the level of national exposure.”

If Cuomo follows through on his plans to run for re-election next year, .

The governor beat back primary challengers on his left in 2018 and 2014, and observers say that to have a shot next year, a rival Democrat would have to be able to make inroads among voters of color in New York City.

James and Williams are viewed as among the strongest potential challengers, but neither has said yet if they will run.

“I am not focused on that," said Williams, who narrowly lost a bid for lieutenant governor against Cuomo’s No. 2, Kathy Hochul, in 2018.

Williams said the latest revelations about the governor’s tactics are “not new nor surprising.”

“They’ve just been hidden in plain sight for so long,” he told POLITICO. “It has not gotten the exposure that was definitely warranted for many, many years. And if it had, New York state might just be in better shape.”

Federal prosecutors . Cuomo has a friend in President Joe Biden, but the White House was not quick to leap to his defense on Thursday.

“The president has been consistent in his position. When a person comes forward they deserve to be treated with dignity and respect, their voice should be heard not silenced and any allegation should be reviewed,” White House press secretary Jen Psaki said Thursday.

Asked if Biden stands by his past comments that Cuomo represents the “gold standard” in pandemic leadership, she demurred. “The president spoke out and said positive things about a range of governors — Democrats and Republicans — who were stepping in when there was a vacuum of leadership at the federal level,” she said. “He made some positive comments about Gov. Cuomo and his role in New York at the time, as he did about a range of governors.”

Steve Cohen, Cuomo’s former top aide and the current chair of Empire State Development, was among the few to publicly defend him Thursday.

“He demands excellence, and he requires that those around him perform,” Cohen said. “His record of accomplishment speaks for itself, and getting the best out of people is what he wants.”

“I can tell you that I have never in my time working with ... Andrew Cuomo, I have never seen anything of the like of what Ms. Boylan has described. His conduct has always been...appropriate. Not that it’s always fun loving and a good time. But it’s always appropriate.”