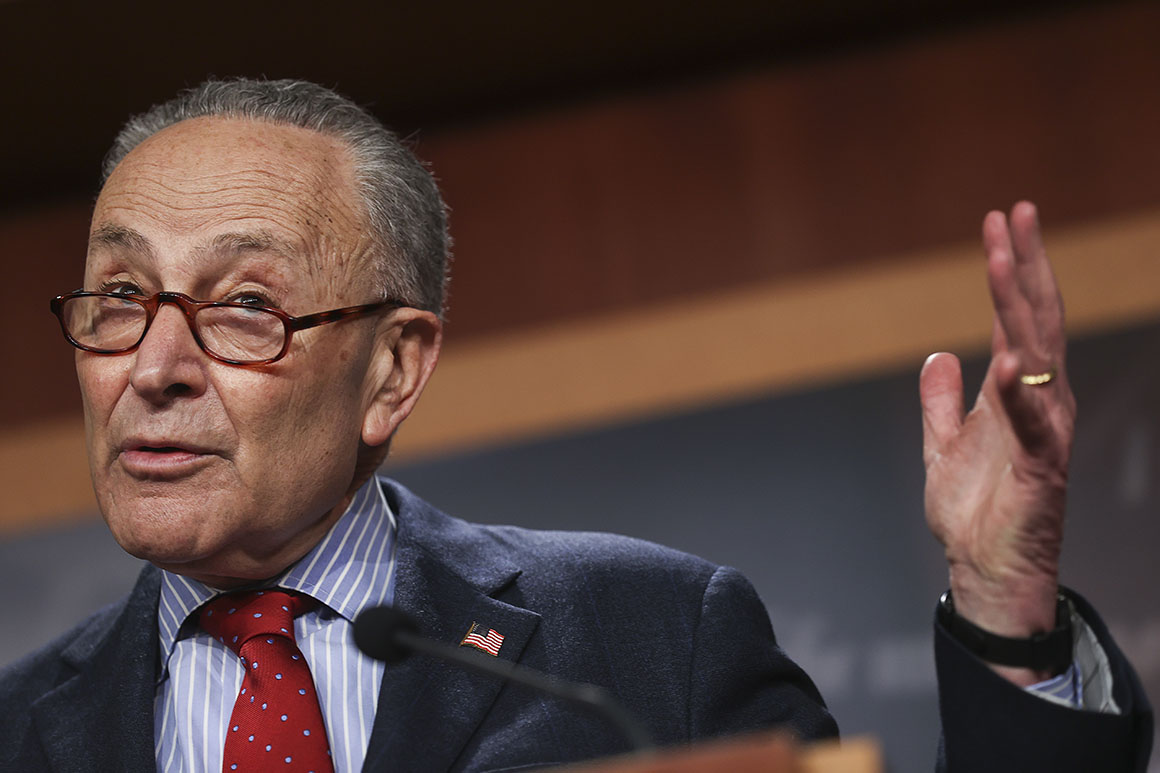 Democrats are trying to pull off a unique budget tactic that — if they succeed — could set a significant new precedent by empowering any party in full control of Washington to stretch the limits of its power.

Senate Majority Leader Chuck Schumer wants to quickly revisit the complex budgetary maneuver known as reconciliation that was used to pass President Joe Biden’s $1.9 trillion coronavirus relief package, unlocking a second attempt to pass major legislation without Republican votes. If Schumer gets permission to proceed, Democrats could pass Biden’s multi-trillion-dollar infrastructure agenda without GOP support, while keeping another shot at muscling through major priorities that are now stuck on the back burner.

Schumer has asked the Senate parliamentarian, the upper chamber’s official adviser on procedural matters, for her OK to essentially recycle the same reconciliation process used to pass Biden’s pandemic aid package earlier this month. But his request, if granted, would further stretch a legislative tool that wasn’t designed for the sorts of policy goals that both parties have used it to pursue.

Winning the green light for a second reconciliation run this year could embolden the current Democratic majority, as well as any party that commands every lever of government power, to muscle its priorities past partisan roadblocks by using a process that's supposed to be an exhausting lift for lawmakers.

“This is not a simple trick,” said Zach Moller, deputy director of economics at the think tank Third Way. “It is a painful, painful process that will take a lot of time.”

Should the parliamentarian say yes to Schumer, reconciliation could technically get used as often as a Senate majority party wants to, provided that it also holds the House and White House. The biggest reason Democrats may not want to use the procedure over and over again, though, is the sheer laboriousness of a process that forces members to spend hours upon hours on the floor in both chambers, in addition to two Senate voting marathons in which anyone can force a roll-call vote on any amendment of their choice.

"If this is allowed, that’s going to be the thing that limits this process," Moller said. "Because Senate floor time is incredibly valuable."

More reconciliation also means the parliamentarian has more opportunities to tank major chunks of Democrats’ legislation if they don’t gel with the arcane rules that guide its path to filibuster-proof passage. For that and other reasons, Democrats recognize that reconciliation doesn’t work as an end-run around eliminating the filibuster, the 60-vote threshold for passage of most bills that their left flank is pushing to kill for good.

“You don’t want to do business via reconciliation all the time,” said one House Democratic lawmaker, who candidly discussed his party's quandary on condition of anonymity.

“The Senate is totally screwed up," this Democratic lawmaker added. "The Senate needs to figure out how it wants to be an effective legislative body, and that’s kind of the bottom line."

Democrats used a budget resolution for the current fiscal year to pave the way for Biden’s massive pandemic aid bill, allowing them to pass the measure with a simple 51-vote majority in the Senate. Now Schumer is asking the Senate parliamentarian whether he can revise that budget resolution, hoping to use another grueling round of reconciliation to pass Biden’s infrastructure package.

It’s far from clear if the parliamentarian will allow the New York Democrat’s request, which has never been tried before. A go-ahead would likely frustrate Senate Minority Leader Mitch McConnell, who alluded to Schumer's parliamentarian plea during a Monday event in Kentucky. McConnell observed that Democrats seem to be planning to exclude Republicans from talks on infrastructure — an area that members of both parties have said could be ripe for cross-aisle cooperation. 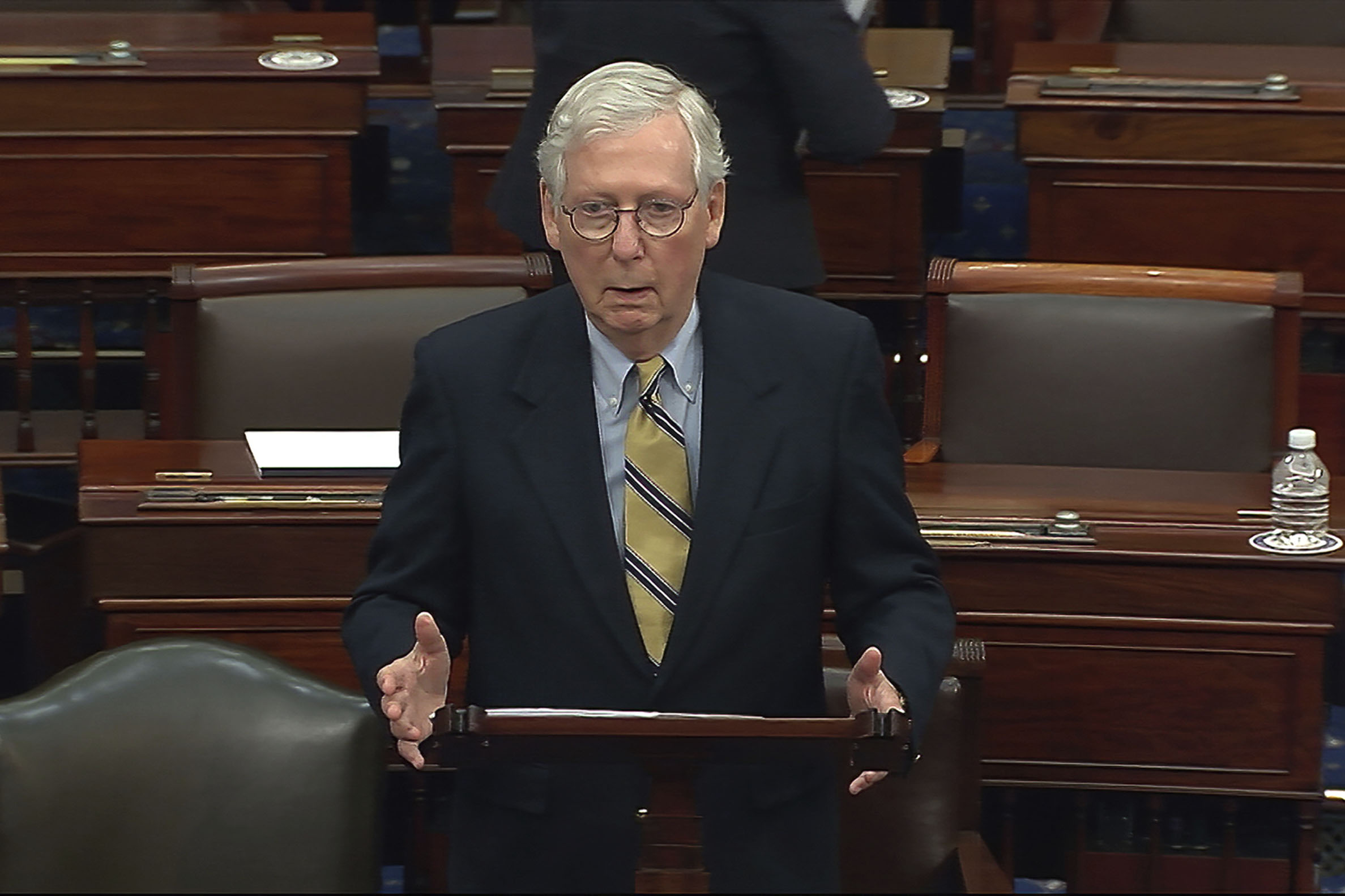 Schumer's move also isn’t necessary — Democrats can use a budget resolution for the next fiscal year in the coming weeks to unlock reconciliation for Biden’s infrastructure plan, which he’s set to unveil on Wednesday in Pittsburgh.

They’ll also have yet another shot at reconciliation before next fall's midterm elections thanks to the fiscal 2023 budget measure. That means Democrats already have at least three chances to use the budget procedure before the next election, when they could lose their narrow majorities in the House or Senate.

Of course, taking another bite at this year's budget without needing to write a new resolution would still give a boost to Schumer's party.

Federal law doesn’t appear to limit how many times one party can “trigger reconciliation through revisions of the same budget resolution,” tweeted Josh Caplan, a former Democratic Hill staffer who worked on budget and spending issues and is now with the organization AcademyHealth.

“If they hate themselves enough, they can revise the budget monthly to create new reconciliation instructions,” Caplan tweeted. “As always, it’s better to just nuke the filibuster.”

But Schumer’s reconciliation gambit, while it does increase the number of bills that can side step a filibuster, isn't a substitute for eliminating the 60-vote threshold that's standing in the way of multiple Democratic priorities. Many of those stalled House-passed bills, like voting rights legislation, couldn’t pass muster with so-called Byrd Rule restrictions that limit what can be included in reconciliation legislation.

For example, the Senate parliamentarian last month nixed a provision to raise the hourly minimum wage to $15 by 2025 in Biden's Covid relief package. Moderates are now hashing out another way to save the wage hike.

A Schumer aide said that Democrats haven’t made a final decision about using reconciliation for Biden’s infrastructure and jobs package.

“Schumer wants to maximize his options to allow Senate Democrats multiple pathways to advance President Biden’s Build Back Better agenda if Senate Republicans try to obstruct or water down a bipartisan agreement,” the aide said.

Several other senior Democrats said the next steps of the process will likely remain in limbo until the parliamentarian's ruling. That Senate office, which keeps its operations unusually closed-off, has no specific deadline to to issue a ruling, though several senior aides expect it to happen within weeks. From there Democrats will decide whether to proceed with Schumer's approach and which priorities they should tackle first.

Asked about Schumer’s plan on Monday, White House press secretary Jen Psaki said: “The White House and the President will leave the mechanics of bill passing to Leader Schumer and other leaders in Congress.”

Still, Schumer’s request to recycle the last budget reconciliation process left some lawmakers and staffers scratching their heads — unaware that such a novel approach was even a possibility.

“My reading of the text of that section [of the law] seems like it’s perfectly okay to do it,” the House Democratic lawmaker said. “I didn’t know it was ever in there.”

Sarah Ferris and Marianne LeVine contributed to this report.