6 Bold Ideas for Gun Reform That Could Actually Happen 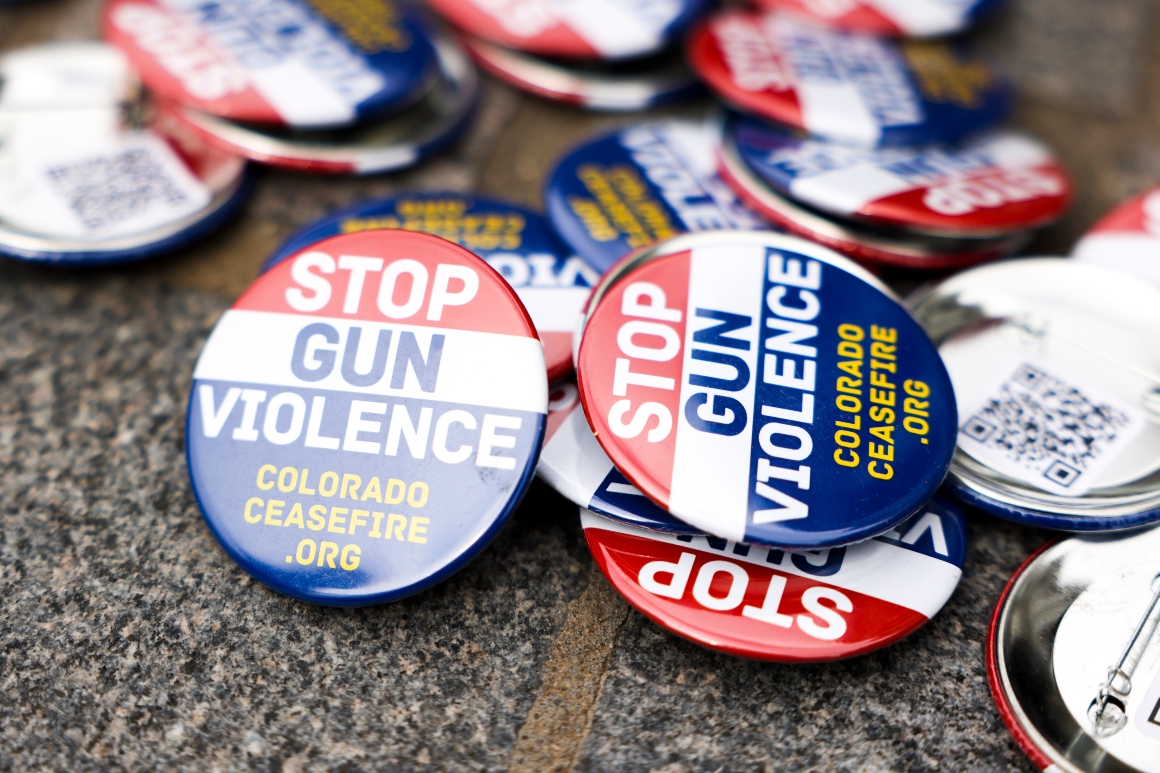 In the wake of back-to-back mass casualty shootings in Colorado and Georgia, President Joe Biden reiterated his support for legislation to expand background checks and ban assault weapons. For many gun violence prevention advocates, the emphasis on these reforms — ideas that have been floated after every major tragedy since Sandy Hook — isn’t especially encouraging. It’s not that they aren’t welcomed proposals (a majority of Americans still support both), it’s that advocates are tired of waiting — and they now see opportunity to make progress, perhaps even have a bigger impact, through a variety of other initiatives that don’t depend on Congress.

Here are some of those ideas — proposals that range widely but have one thing in common: they're state and local-level measures that don't count on major action from the federal government.

Since the 1980s, the NRA has been lobbying state legislatures to . This type of legislation is called preemption, and it’s pervasive — there are now broad firearms preemption laws in 43 states.

Once a preemption law is passed, the National Rifle Association or other gun rights groups can sue a city over ordinances already on the books (banning guns in bars or prohibiting open carry in city parks, for example). Any gun regulation that exceeds state law becomes a potentially expensive liability. Because rural areas are disproportionately represented in state legislatures, this tactic has enabled red states to keep their blue cities in check. Indeed, firearms preemption bills have become so popular in Republican strongholds that lawmakers have adapted that model to other areas of regulation. (Texas, for example, has used preemption laws to undermine big-city bans on and .)

In a , Colorado Ceasefire only mentioned one state legislative priority: “The Colorado General Assembly must act, now, to repeal the state pre-emption law.”

Is there any appetite, though, among Republican state representatives to reverse course on preemption? Historically, home rule was a conservative idea, so it stands to reason that some Republicans might be persuadable. That turned out to be the case in Nebraska, where gun violence prevention advocates have .

“Nebraska, despite being a super-majority Republican-led state, is often centrist and populist in a lot of ways that matter,” said Melody Vaccaro, executive director of Nebraskans Against Gun Violence. “We could really point to very specific examples and tell people ‘This is what preemption does, it takes away your ability to sort these things out,’” Vaccaro explained. “We were able to call one little town, and say ‘Hey, you know, you have this ordinance that says people can’t shoot guns in cemeteries. The state’s trying to take away your ability to have a rule like that.’ Communities know what’s best for them, even on guns.”

Many states have gradually lowered the bar to obtain a permit to carry a handgun in public places. The trends have been toward fewer hours of classroom instruction (), eliminating shooting requirements at the range, and lowering fees. Tennessee now offers a gun carry permit course that can be . Other states, such as Kansas, have eliminated licensure altogether. When Texas lowered training standards for its concealed handgun license in 2013 to just four hours of classroom instruction, lawmakers said that there simply wasn’t enough material to justify the 10 hours previously required. Typical curriculum covers operation of a firearm and some guidance about where and when it might be appropriate to use it. Some gun violence prevention advocates would like to see the curriculum expanded to include strategies in de-escalation, risk avoidance, safe storage and first aid. Everytown for Gun Safety goes a step further, suggesting that such training should be , not just those seeking a permit to carry it in public.

So far, the NRA has consistently supported state legislation to reduce or eliminate training requirements for carry permits. That position, though, puts the gun lobby in the awkward position of working against the interests of firearms instructors, whose livelihoods depend on the money they make teaching state-mandated classes. There might be a window for compromise.

3. Encourage gun owners to support each other through hardships

Decades of has linked access to guns with higher risk of completed suicide. People who attempt suicide with a gun die nine times out of 10, whereas other common means (such as cutting and overdose) are much more survivable. That’s why the New York Secure Ammunition and Firearms Enforcement Act of 2013 (New York SAFE Act) directed mental health professionals to , which could subsequently seize any guns they might own, and add their name to a “no buy” database for five years. Even in New York, though, this provision is controversial and has faced repeated court challenges. We shouldn’t expect to see similar legislation proliferating across the country anytime soon.

Instead, suicide prevention activists have been trying to cultivate a culture of community responsibility among gun owners, asking them to reach out to friends in crisis with an offer to store their guns after a divorce, job loss, death in the family or other trauma. The idea of letting your neighbor or your hunting buddy lock your gun up in his safe for a while might be more palatable than handing it over to the sheriff. Suicide prevention groups have partnered with gun shops and shooting ranges, first in and now in , to spread the idea through posters and pamphlets.

When someone has been convicted of a felony, is subject to a qualifying restraining order, or has been adjudicated mentally unfit by a court, their name is added to a list of prohibited buyers in the National Instant Background Check System. When the system works as intended, they’ll fail any subsequent background check and won’t be able to buy a gun (at least not from a federally licensed dealer).

But what about guns they already own?

Protocols vary widely by jurisdiction — some municipalities issue deadlines for individuals to surrender their guns, with prescribed penalties if the deadlines are missed. Other locales don’t even inform the individual that they are supposed to surrender their guns. To remedy such inconsistent enforcement, the has proposed that the federal Bureau of Alcohol, Tobacco, Firearms and Explosives form taskforces to create protocols for the seizure of firearms from prohibited individuals, and direct local law enforcement agencies to follow those protocols.

Considering that gun rights advocates have long insisted that better enforcement — rather than new gun control laws — is their preferred remedy for gun violence, this idea could find some bipartisan support.

Manufacturers and retailers of everything from baby food to cigarettes have changed irresponsible business practices either as the consequence of a lawsuit or to avoid the prospect of one. The gun industry, though, has unique immunity from civil suits, thanks to the Protection of Lawful Commerce in Arms Act, signed into law by George W. Bush in 2005. The PLCAA and similar state laws shield gun-makers and sellers from liability for the harm inflicted with their products.

One of the most outrageous examples of industry immunity is the case of , who attempted to sue the online ammunition retailer who supplied the gunman who killed their daughter and 11 other moviegoers at an Aurora, Colo. theater in 2012. Their on the first motion, and they were ordered to cover the defendant’s legal fees, to the tune of $200,000.

The Coalition to Stop Gun Violence has been collecting signatures for a petition to repeal PLCAA, and the Giffords Law Center to Prevent Gun Violence has said that repeal of industry immunity is a legislative goal. Still, any solution that depends on Congressional action remains a long shot — that’s why activists are continuing to test the limits of industry immunity in the courts.

Parents of one of the children killed in the Sandy Hook massacre won a recent victory in their ongoing suit against Remington Arms, the owner of subsidiary Bushmaster, the manufacturer of the AR-15 style rifle used in that attack. The basis of the lawsuit wasn’t the gun itself, but the manner in which it was marketed — with the slogan “Forces of opposition, bow down. You are single-handedly outnumbered.” (Evoking the idea, according to the plaintiffs, that the weapon should be used for “assaultive” purposes.) The Connecticut Supreme Court ruled in 2019 that that , despite Remington’s argument for immunity under PLCAA.

For years, gun violence prevention advocates have argued that guns should be regulated more like cars — with an obligation incumbent on every operator to maintain registration, a license and, crucially, liability insurance. Back in 2017, I reported on the NRA was offering to its members, called Carry Guard. The policies came with a stiff metal wallet card, with a phone number to call in the event that the bearer had shot someone — not to summon an ambulance, but an attorney. This wasn’t the type of insurance the GVP community had envisioned. The coverage wasn’t meant to pay medical costs for gunshot victims — it was intended to pay legal fees to defend the shooter from civil or criminal charges. Critics called it “” and worried that, rather than incentivizing caution, Carry Guard would embolden people to shoot first and get a lawyer to ask questions later. The program , one of a series of missteps that led the NRA to protections earlier this year.

But just because the NRA’s experiment in liability insurance was a colossal disaster doesn’t mean the idea couldn’t have merit if designed differently. Indeed, the prominent ethicist Hugh LaFollette argues in his recent book In Defense of Gun Control (Oxford University Press, 2018) that liability insurance can be both a practical and morally just tool to mitigate the harms of gun violence. LaFollette devotes the last 11 pages of the book to laying out the argument for liability insurance — more space than he spends making his closing case for gun-free zones, an assault weapons ban or any other single policy initiative.

When asked about policies to combat gun violence beyond an assault weapons ban and background checks, gun violence prevention advocates often refer to the , a plan that came out of a 2019 conference hosted by gun violence research aggregator GVPedia. The accord includes some of the policy initiatives outlined here, and many more that could be pursued at every level of government — from the White House to city councils. Po Kim Murray, chair of Newtown Action Alliance, told me she hopes the Biden administration will embrace the Denver Accord. Merely by doing so, Biden could signal state and local activists that this is the roadmap they should follow.

“We know the policy solutions that are required to end this gun violence crisis. We have the Denver Accord,” Murray said. “We’re ready for him to lead and be a warrior and a champion for the movement.”