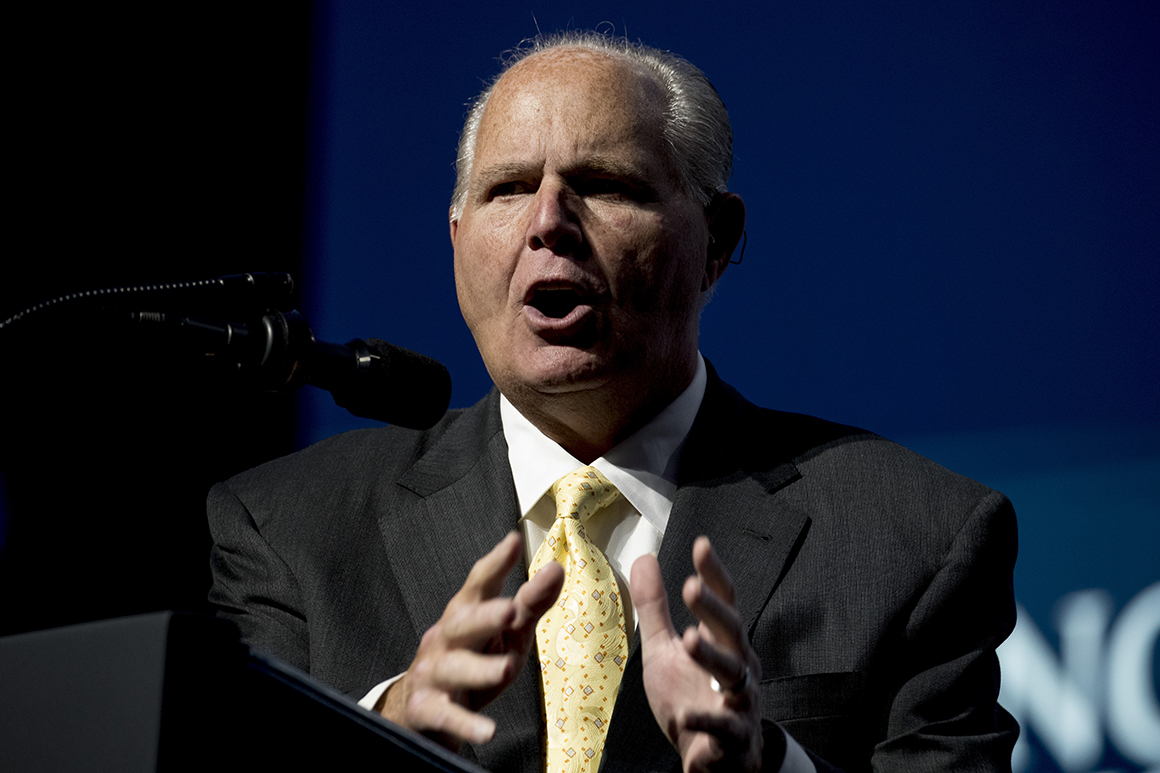 For 25 of the past 30 years, no public figure more fully represented the aggrieved soul of the American Right than Rush Limbaugh.

These past five years, of course, Limbaugh was superseded in that claim by Donald Trump. Even then, it is impossible to conceive of Trump’s path to power if it had not been over ground tilled by Limbaugh.

The radio host, who died Wednesday of lung cancer, showed how to merge the raucous sensibility of a natural entertainer with keen intuition about the everyday political and cultural resentments nurtured by millions of Americans and spin it all into a lucrative mass movement.

Marc Antony came to bury Caesar, not to praise him, but in Limbaugh’s case it is fitting to do some of both.

Praise, of a sort: He was a brilliant performer, a self-invented character who, reading not very far through the lines of interviews over the years, had the interior life of a lonely misfit who came alive and found adoration mainly in front of the microphone. Here, in this florid exterior life, he used bombast, humor, insult, indignation, malice, superb timing and an astonishingly facile mind to make himself very famous, very rich and very influential. Limbaugh was wooed by presidents if they were Republicans, castigated by them if Democrats. In both cases they often seemed intimidated by him.

But the burial part is more important. At the age of 70 when he died, Limbaugh lived long enough to see where his brand of commercialized contempt — once it moved from the margins to the center of U.S political culture — would lead. It leads to a rancid, cheerless place, one quite different than anything Limbaugh himself talked about in earlier phases of his career when he rhapsodized about his notions of the ideal America.

There is no more pressing task, for either the conservative or progressive movements, than to endeavor that Limbaugh and the style of politics he represented will soon be seen as artifacts of a receding age, rather than forerunners of the next one.

What does that latter alternative look like? Well, Limbaugh himself described it in December, not long before his last show, when he told a caller that the United States was “trending toward secession.” Yes, seriously, as in during the Civil War. " he said, not quite a month before the Jan. 6 insurrection at the Capitol. "There cannot be a peaceful coexistence of two completely different theories of life, theories of government, theories of how we manage our affairs. We can’t be in this dire a conflict without something giving somewhere along the way." After an uproar, that this was not what he wished for, only how he heard people talking.

But the comment highlighted several of the contradictions that defined Limbaugh’s career and still trap the conservative movement now, as Republicans ponder that they have won a popular majority in only one presidential election in the eight since the host first vaulted onto a national stage in the early 1990s.

The first paradox relates to the GOP’s 40-year journey from Ronald Reagan to Trump. Limbaugh often professed his adulation of Reagan, who had just left office as the younger man’s career began to climb. By the end of that career, Limbaugh was a Trump partisan, and at the time his cancer diagnosis became public was rewarded for his loyalty with a State of the Union address tribute and a Presidential Medal of Freedom.

How is the genial courtesy of Reagan and his sunny-side-up approach to public life connected to the rudeness and self-absorption of Trump and his grievance-uber-alles politics?

For most of his career, Limbaugh professed to be a traditional conservative who liked small government, low taxes, strong defense, free trade and respect for the Constitution. Speaking to the Conservative Political Action Committee in 2009, he said conservatives want these things, and also to be left alone from the hypocritical, bossy do-goodism of liberals. When conservatives look at the country, he said, “We see Americans. We see human beings. We don’t see groups. We don’t see victims.”

How does this square with a politician like Trump, who distrusts free trade, didn’t blink at massive deficits, said a U.S. federal judge couldn’t rule fairly on immigration cases because he was of Mexican heritage and encouraged the belief that an election overseen by states and ruled legitimate by courts was “stolen” because he lost it.

Especially early in his career, he had a familiar response when people tried to grill him on matters of fairness or consistency. He was a performer, not a politician or a journalist. “I look at this as entertainment,” in 1993. He could be intermittently responsive on email. Once, when I emailed him about an on-air riff concerning me that I thought was unfair, he emailed back in friendly fashion suggesting, in advice I took, that I should not take things so seriously and go with the flow.

When it suited him, however, he could also take himself and his own views quite seriously, as when he told a : “I want to persuade people with ideas. I don’t walk around thinking about my power. But in my heart and soul, I know I have become the intellectual engine of the conservative movement.”

Here is another contradiction. For all that a generation of conservatives boasted that they were animated by ideas — unlike liberals, who are supposedly animated by special interests and identity politics — Limbaugh and Trump represented a psychological movement more than an ideological one. It is unified by shared dislikes — of the media, of civil rights activists, of know-it-all professors, of feminists, of preening, hypocritical liberal politicians, of anyone who, they perceive, assumes a pose of moral superiority toward the cultural attitudes and lifestyle of traditional middle Americans.

Viewed through this prism, there is much more continuity than drift in Limbaugh’s political profile over the years, even if he drifted from Reagan Republican to Trump Republican. From his early days upon going into national syndication, he referred to “feminazis.” In 1990, for a while he had a regular shtick in which he would introduce such as, “Back in the Saddle,” “Kiss Him Goodbye,” and, “Looking for Love in All the Wrong Places.” He later said he regretted mocking people who died painful deaths. But it’s also clear his mockery in 2012 of as “a slut,” after she testified to Congress in favor of coverage of birth control as a health care benefit, was not in the least an anomaly.

One last contradiction: Limbaugh in his own life hardly represented the kind of traditional values he extolled. He was married three times and arrested for misusing prescription painkillers, to which he acknowledged he was addicted. Nor in interviews did he present a picture of someone who regarded himself as one of life’s natural winners. His father was austere and strict, and wanted him to be an academic standout, but instead he dropped out of college after a year. After his syndicated radio show became a hit, he expected to be embraced in elite New York media circles by the likes of Peter Jennings, Tom Brokaw and Dan Rather. “Look, I admired these people,” he told , “I thought they would welcome me as one of them. I was wrong.”

Much of Limbaugh’s performance was entertaining bluster, and, if one happened to catch it in the right mood, it was made more enjoyable by the impression that he was enjoying it as much as anyone. But the core of resentment was real — as corrosive for Limbaugh personally as it is for the political culture over which he loomed so large for so long.